“Dog Shaming,” “Reasons My Kid is Crying” and “Stuff on My Cat” as Communicative Objects

The following websites are user-submissions sites that can act as communicative objects. Each entry follows a meme-like formula that is repeatable and shareable, acting as objects of exchange for users due to their “universal” nature.

Dogshaming.com posts submissions of photographs of dogs after they have done something naughty. Usually there is a handwritten note beside the dog describing the bad behaviour. Most effective are the photos of dogs that are looking particularly guilty or ashamed – but many of the signs posted beside the happy-go-lucky pups quip “Not ashamed.” Some of the photographs have detailed captions that explain the dog’s history as a rescue or some of their other qualities. As well, the site advertises dogs that are in need of adoption. The site has also been turned into a book aptly titled Dog Shaming. The universality of bad dog behaviour is the reason why this meme is so popular. As the description of the book says: “So share in the shaming and laugh through your frustration as Dog Shaming reminds us that unconditional love goes both ways.”

Reasons My Son Is Crying

Reasonsmysoniscrying.com follows a similar formula to Dog Shaming. Photographs of wailing children are submitted with short captions explaining the nonsensical reason for it. The site’s creator, Greg Pembroke, also posts jokes about parenthood and funny conversations that he has with his two boys. Again, the site creates a meme out of the universal experience of kids crying for silly reasons, creating a communicative object that can be shared and exchanged. The site has also been turned into a book. 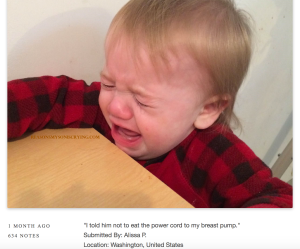 Stuff On My Cat

The tagline for stuffonmycat.com is “stuff + cats = awesome.” The site is literally stuff on people’s cats, showing the universal experience of the “Idon’tgiveashit” attitude that cat parents are so familiar with. This site deviates from the dog/kid formula because the submissions do not include captions or any other text. This site promotes images rather than a narrative, and perhaps is less effective as a token of exchange. This site does not have a book deal. 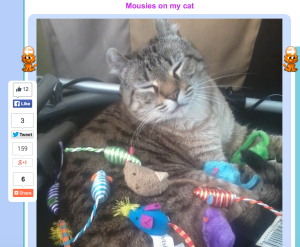 Memegenerator.net is where you can generate your own memes using “character” templates. Following the the popular formula for that character is ideal and usually will result in upvotes. it can be hard to stick with the formula, since the generator doesn’t always give an example (ie. I found the Willy Wonka meme pattern has changed recently). This means there is a certain kind of internet or “meme literacy” involved in recognizing the pattern to the joke. 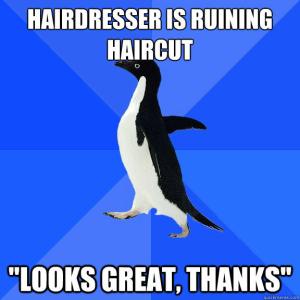