a) The first category I will call “expired cool,” in which the photographed are doing something which seemed “cool” to them at the time (or whatever the word for cool was at the time) but are now embarrassed for having done. Typical examples are of the photographed wearing matching clothes, or a being fans of a trend which now seems ridiculous to them. 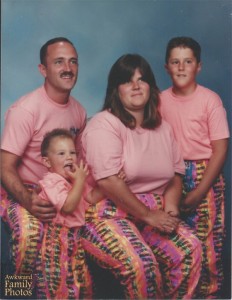 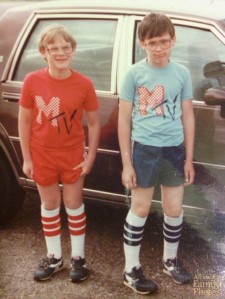 b) The second broad category I will call “unreadable awkwardness,” wherein photographs are embarrassing for the photographed for some reason that is not clear to the reader unless explained in a caption. Sans caption, the reader will likely not understand why the situation is or was awkward for the photographed (rather than just slightly bizarre [unexpected in a family photograph, in other words]).

c) The third category, into which my personal favourite photographs fall, I call “unavoidable awkwardness,” wherein something is occurring that is beyond the control of the photographed. There is just something so discordant to the idea of family photos about two hippopotamuses having sex behind a young girl, two boys and their grandparents standing in front of a bunch of Hustler magazine cover shots unknowingly, or a man proposing to his girlfriend inside a giant heart which from above looks less like a heart than a caricature of male genitalia. (Now that I think about it, sex, the creator of families, seems ironically anti-family – at least in family photos). 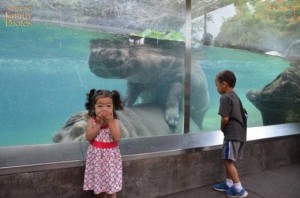 What, though, defines what one expects to see in a family photograph? What sets the norm? Is there something that makes a photo a “family” photograph? Need it simply be a photograph of a family, or are there generic conventions and expectations?

While Awkward Family Photographs is supposed to be a fun website to scroll through in one’s free time, questioning why (and even if) each photograph fits in the category of “awkward” family photo can reveal much about the way we unknowingly reproduce longstanding ideologies in our everyday photographic practices.

2 thoughts on “Awkward Family Photos (and why they’re awkward)”